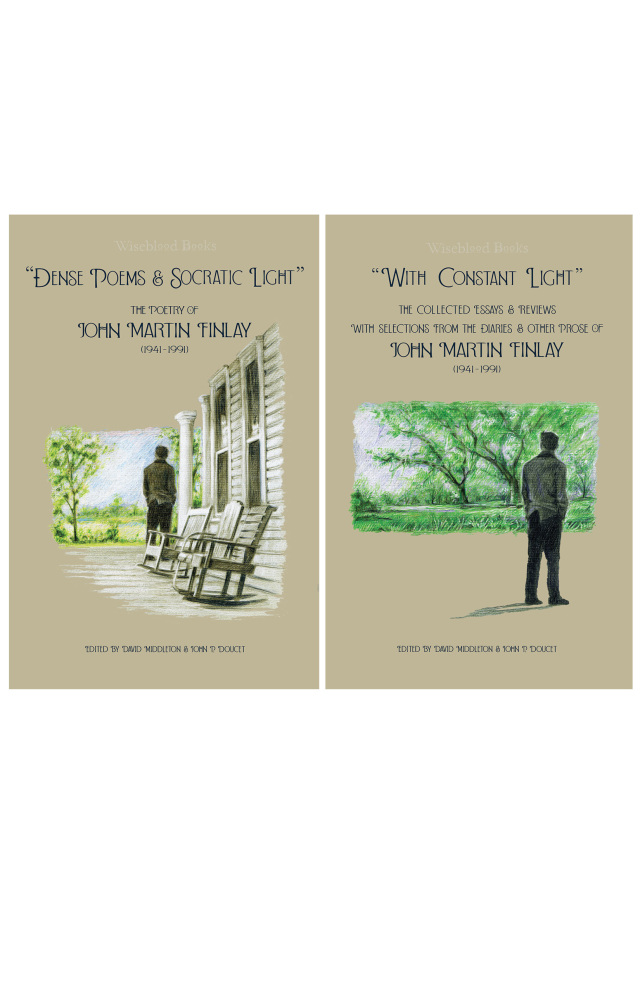 John Martin Finlay (1941-1991) was born in Ozark, Alabama. Finlay received his Ph.D. in English from Louisiana State University in Baton Rouge in 1980, the same year he converted to Roman Catholicism.

2). “With Constant Light”: The Collected Essays and Reviews, with Selections from the Diaries, Letters, and Other Prose of John Martin Finlay (1941–1991)

This Wiseblood Books edition of Finlay’s poetry and related writings is the most comprehensive edition to date, including many previously uncollected and unpublished materials.

John Finlay’s poems are almost all in traditional literary forms. He mainly wrote plain-style lyrics of direct statement, short narratives, and post-symbolist poems whose sensuous details exhibit controlled associationism in which definite ideas and feelings are indirectly yet logically presented. Whether plain-style, narrative, or post-symbolist, Finlay’s poems are serious, simple, deep, direct, and often traumatically revealing of the human condition. The best of them are truly unforgettable.

Finlay addresses such subjects as the origin of the mind, the relation of mind and matter, the mind and the irrational, the mind and God, the nature of evil, Thomistic theology, philosophical subjectivism, the inscrutability and beauty of the natural world, primitive religious rituals, and, especially in the later poems, family life in the South since the early nineteenth century, Indian life in the South, the nature of modern war, and the isolation of the serious thinker and the artist in the contemporary world.

Particularly impressive are poems in which these themes are confronted by one or another of Finlay’s heroes of the mind, including Odysseus, Oedipus, Solon, the exiled Ovid, a Benedictine monk, Samuel Johnson, Audubon, Henry James, or Sherlock Holmes and poems in which characters such as Narcissus, Spanish gold-hunters, Descartes, and Rimbaud suffer various forms of self-delusion which warp or destroy their moral nature. Among Finlay’s most poignant and tragic figures are those who, through madness or disease, allow us to see beyond their suffering and unawareness the divinely ordained, objective moral grounding of the world. Examples of such characters are the mad women in “The Locked Wards,” the shattered Confederate veteran in “The Blood of Shiloh,” and the hate-filled, natural-law-denying novelist in “A Portrait of a Modern Artist.”

Readers who want serious poems that vividly present sensuous experience as understood by a mature mind steeped in classical and Christian tradition, yet fully aware of the problems of the contemporary world and of the perpetual threat of the primitive and the irrational, should find much here to contemplate. In their severe and uncompromising grandeur John Finlay’s best poems are surely permanent additions to American literature.

ABOUT “With Constant Light”

Following the line of argument in the essay “Mere Literature and the Lost Traveller” by Allen Tate (1899-1979)—fellow southerner, poet-critic, and convert to Roman Catholicism—Finlay searched for, detected, and then subjected to an analysis both passionate and dispassionate certain Gnostic beliefs concerning the relationship between God (as the detached and absent Deus absconditus), the human mind, and the natural world. Finlay discovered this sometimes-hidden presence of Gnosticism not only in self-consciously modern writers such as Flaubert, Valéry, Nietzsche, Freud, and Kafka but even in some of the theological writings of Cardinal John Henry Newman and in the poetry of the poet-priest Gerard Manley Hopkins. At the same time, Finlay, as he well knew, was confronting such Gnostic demons in his own life and mind. Finlay described his analysis of the Gnostic spirit in modern writers as a “journey through hell.”

This Wiseblood Books edition of Finlay’s prose writings is the most comprehensive edition to date, bringing together for the first time all of Finlay’s essays and book reviews, his one known short story, statements about poetics, and other prose writings including selections from Finlay’s letters and diaries. Two of the four appendices—one by Lewis P. Simpson and one by David Middleton—put into historical context, and the context of Finlay’s own life, the essays that make up his posthumously published book on Gnosticism and Modernity. For this Wiseblood Books edition, these essays have been re-edited and the original title of the book has been restored: Flaubert in Egypt and Other Essays. An updated bibliography of works by and about Finlay is included at the end of the volume.