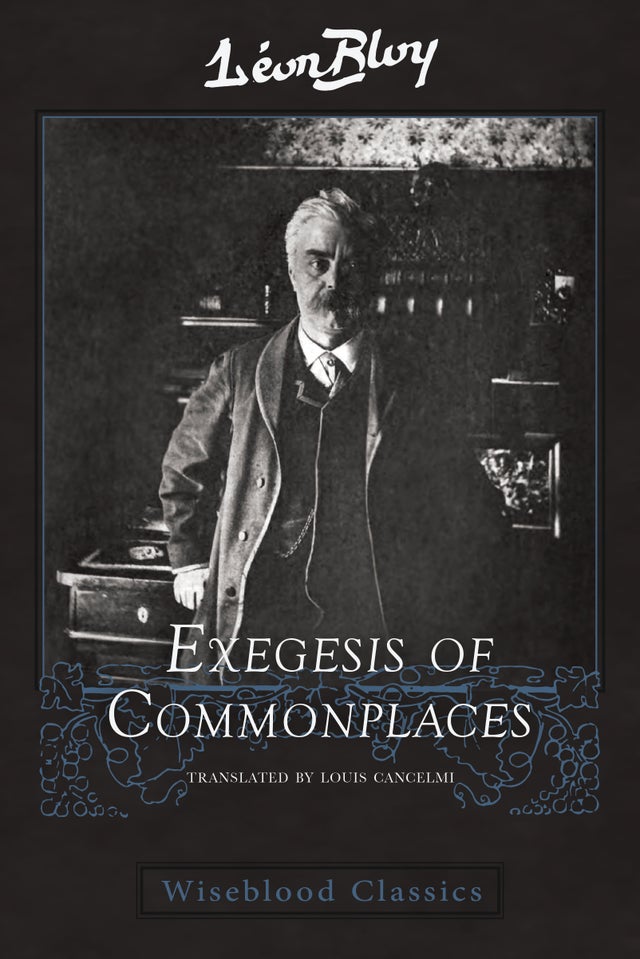 Exegesis of Commonplaces, by Léon Bloy (translated by Louis Cancelmi)

Leon Bloy’s Exégèse des lieux communs—first published in 1902—appears here in English for the first time through Wiseblood Books. Among the novels, essays, biographies, and journals composed by Bloy, there is one work whose only appropriate classification was given directly in its title: Exegesis of Commonplaces—a peculiar foray into a genre normally reserved for theologians. And yet, as Albert Béguin notes in his sublime Léon Bloy: A Study in Impatience, Bloy’s entire output may be seen as a labor of exegesis: “…it became Bloy’s aim to make his mind as transparent as possible to the light of grace and to penetrate further and further into the mysteries hidden beneath the surface of history and the state of mankind.”

In the present volume, this “light of grace” is refracted upon the infallibly trite and rigorously unexamined language of the bourgeoisie. Banalities such as “Business is business,” “You can’t have everything,” “I’ll believe it when I see it,” “Money can’t buy happiness,” etc., are treated with the gravity of sacred incantation and provide the framework for Bloy’s dissections. As a matter of structure, the Exegesis recalls Flaubert’s Dictionary of Received Ideas or Bierce’s Devil’s Dictionary, but whereas the latter are largely satirical (and cynical) attacks on an emerging class of acquisitive conformists, Bloy’s project excavates the spiritual content of what might otherwise be dismissed as mere vapidities. Though he despises the bourgeoisie for its greed and vanity, for its hypocrisies and cruelties, Bloy nevertheless recognizes that “the most inane representatives of the bourgeoisie are themselves fearsome prophets,” and that, “in the form of Commonplaces, they continually and unwittingly advance truly impressive claims, the implications of which, to them, remain unknown.” Those implications, the supernatural blood invigorating an otherwise superficial and often incoherent idiom, are Bloy’s true subject, and it is the purpose of his Exegesis to distill their essence.