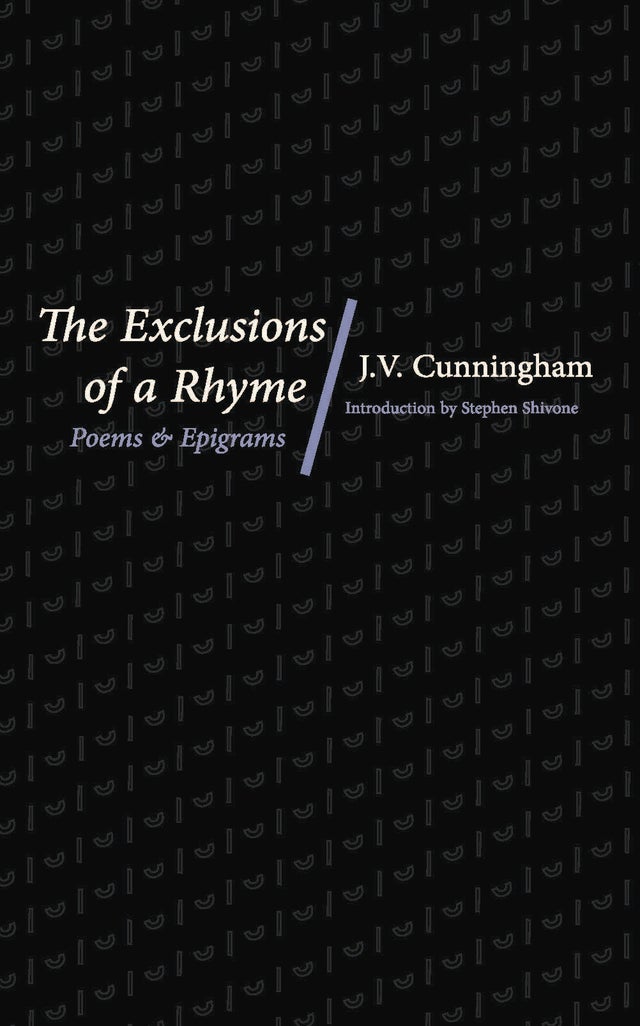 The Exclusions of a Rhyme: Poems and Epigrams

The author of this small but superbly crafted book of lyrics, epigrams, and translations, J.V. Cunningham (1911-1985), is almost totally unknown outside a small literary coterie. His controversial contemporary Yvor Winters thought Cunningham was one of the greatest of the poets in our language, and, despite their complicated personal relationship, vigorously promoted his work. First issued in 1960, The Exclusions of a Rhyme brings together Cunningham's first four books of poetry-The Helmsman, The Judge is Fury, Doctor Drink, and Trivial, Vulgar, and Exalted-published between 1942 and 1959, as well as a "prefatory" poem, "To My Wife," and a handful of translations of Latin poetry.

Cunningham would always consider himself a Westerner and once opened a lecture at Amherst by referring to himself as a "renegade Irish Catholic from the plains of Montana," despite not having lived in Montana since his youth. The American West left its mark on his imagination, as can be seen in the imagery of many of his poems. As any reader will quickly observe, Cunningham's verse is formal in the extreme-there is nothing accidental, no wasted verbiage, nothing extra, no Whitmanian inclusiveness. Though his poems deal with a variety of subjects and themes both serious and unserious--"the trivial, vulgar, and exalted"--and employ many different poetic styles and meters, to a poem they exhibit a scrupulous attention to matters of form.

At its best, Cunningham's "exclusions" have an emotional intensity that seems almost overwhelming at times. As in much classical poetry, the disciplined restraint of the form seems to intensify its power to convey and evoke emotion. There is something almost fierce and wild, as of a barely tamable animal, in his verse, which the form seems to be struggling to keep at bay; and the very strength needed to control the wild emotion somehow manifests its power.

---from the Introduction by Stephen Shivone