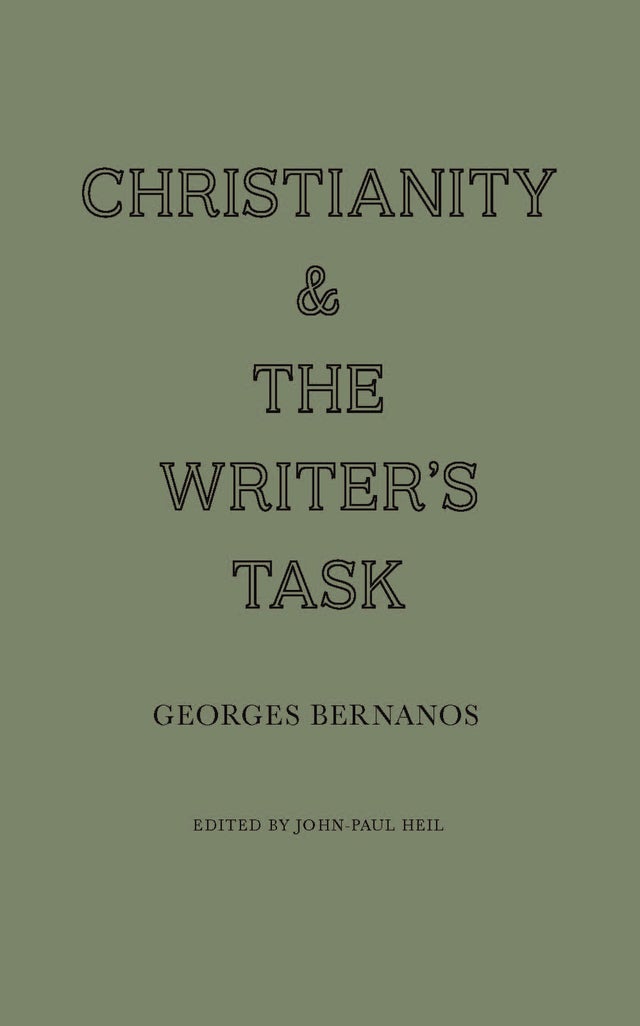 Christianity and the Writer's Task, by Georges Bernanos

Should writers aim to comfort their readers or to shock them out of comfort? Georges Bernanos (1888-1948), one of the great Catholic authors of the twentieth century, argues for the latter. In this incisive series of letters and essays, collected here for the first time in English, Bernanos rails against the propagation of unreflective piety and simplistic views of the divine.

In "Christianity and the Writer's Task," Bernanos lambasts the mediocrity and lukewarm faith of believers who have laid down their crosses in favor of a palliative Christianity. Instead, he contends that a good writer must portray the harsh realities inescapably intertwined with sanctity and the necessity of suffering for the sake of sainthood.

Bernanos's "Journal Entries and Letters Recounting an Ecclesial Existence" demonstrate the celebrated author's disgust with what his contemporary Dietrich Bonhoeffer called "cheap grace." Bernanos warns that "the mediocrity of others keeps open a wound in us that mustn't stop festering and causing us pain; and it would close only at the risk of poisoning the whole organism." A good writer must show that though the cost of discipleship is high, it is the only thing worth paying for.

The author of Diary of a Country Priest brings these ideas to a head in his "Sermon of an Agnostic on the Feast of St. Thérèse," which imagines an educated non-believer trying to shake half-asleep Sunday churchgoers out of their spiritual slumber. Bernanos's agnostic takes his audience to task, compelling both them and us to consider how and why a "comfortable Christian" is an oxymoron. Bernanos portrays the dangers of keeping the saints whom we purport to praise as our patrons at arm's length. Instead, the faithful must listen to Christ's call to "become as children"-radically surrendered. Bernanos's prescient warnings for those living in a "self-proclaimed materialistic society" sound with the voice of revelation: "You will never disarm them save by heroism."