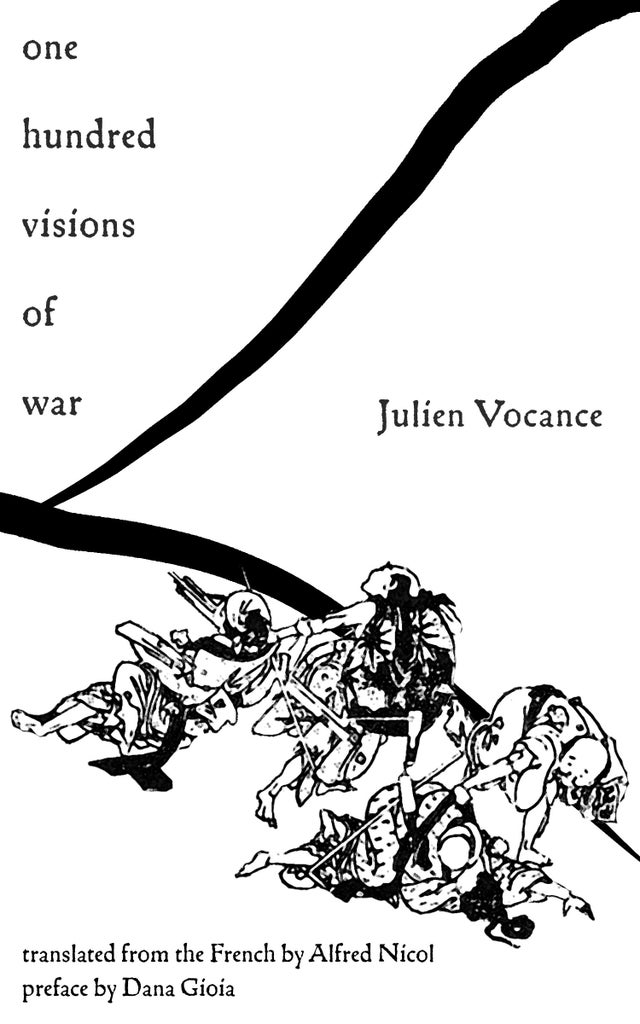 The “One Hundred Visions of War” of Julien Vocance (1878-1954) comprise some of the first haiku written in the West. Where classical Japanese haiku traditionally speaks of the beauty of Nature, Vocance uses the form to a very different purpose, depicting the horror and brutality of armed conflict, as seen from the trenches during the First World War. Readers get a ground-level view of unimaginable slaughter. The value of Vocance’s poetry lies in its witness to the experience of the human being caught up in a battle which, as Wendell Berry put it, “the machines won.” Only imagine: an obscure soldier-poet pits his human art against overwhelming military technology, and his art survives.

Dana Gioia's expansive preface situates 100 Visions of War as "a major poetic testament of the Great War" that is both accessible and emotionally engaging. "More than a century after its publication, Vocance’s sequence has lost neither its shock value nor its strange tenderness."

“Like Ungaretti and Apollinaire, Julien Vocance faced the instant karma of the First World War with outcries of visionary perception. Each flash of the battlefield, each haiku, is a compelling ode to what can go away in a second, and to what remains, even amid annihilation. One Hundred Visions of War is an essential addition to the history of modernist poetry. More importantly, it is an urgent and deeply moving read, each vision guided into English by the poet Alfred Nicol, who brings a keen eye, an exacting ear, and a consummate poetic intelligence to these pages.”

—Joseph Donahue, Professor of the Practice at Duke University; author of the ongoing poem Terra Lucida

of image and sensation. The trenches of WWI materialize on the page by way of language both fresh and timeless.”

“When I learned that the French poet Julien Vocance chose to write his One Hundred Visions of War in—of all things!—haiku, I wondered why: how could that most fleeting, elusive, and subtle of forms deal with a theme as dense, brutal, and unsubtle as the horror that is war? Well, I’ve just read—and reread, nonstop—Alfred Nicol’s brilliant translation of the French original, and the only thing I’m wondering now is how I managed to undervalue so completely what imagination, speed, daring imagery, black humor and an uncanny gift for language can do to convey the unspeakable perfectly.”

—Rhina P. Espaillat, 2021 Recipient of the NEPC Golden Rose Award; author of And After All

—Joshua Mehigan, Author of Accepting the Disaster, a New York