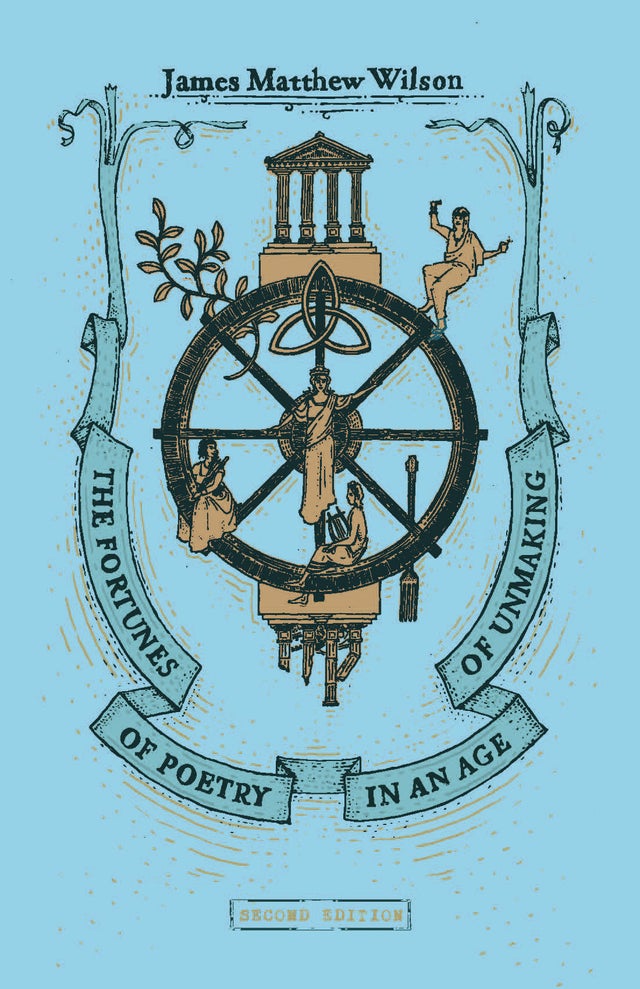 The Fortunes of Poetry in an Age of Unmaking, by James Matthew Wilson

In The Fortunes of Poetry in an Age of Unmaking, James Matthew Wilson demolishes the bankruptcy and pretensions of much contemporary poetry and literary scholarship. Though he offers many illustrations of the sometimes hilarious absurdities that have overtaken our literary culture, he does not settle for mere criticism or mirth. Rather, Wilson's study offers us nothing less than a renewed philosophy of poetry and literary criticism, one that accounts for poetry's historical distinction as the "paradigmatic art form" and shows us a way forward to its renewal and restoration in this otherwise dreary "age of unmaking."

The adjective “magisterial” is too frequently misapplied in reviewing scholarly books, but if ever a literary study merited it, James Matthew Wilson's The Fortunes of Poetry does.—Helen Pinkerton Trimpi, author of Taken in Faith: Poems

What is poetry and what is poetry for? To ask the first question is to ask the second. To answer both in light of the western tradition stretching back to Homer, and against much modernist and postmodernist poetic theory and practice, is the goal of this remarkable book. Poetry’s final end is nothing less than to arouse in us a profound sense of wonder in coming to know that “Reality as a whole is formed as the good-world-order, the intelligible beauty showing forth from [the] cosmic circle of procession and return.”—David Middleton, author of The Fiddler of Driskill Hill, in The American Conservative

I know of no contemporary scholar possessed of his breadth of learning and clarity of expression, who is at the same time a poet in love with the art, loving it with true intellectual passion. Wilson attempts no less for poetry than the recovery of a full range of human experience, thought, and religious faith for its content, and a clear philosophical grounding for its form.—Anthony Esolen, translator of the Modern Library edition of Dante's Divine Comedy

This brilliant new book powerfully demonstrates how the evolution of Modern and Post-Modern criticism and theory, free verse, and political ideology have greatly diminished contemporary poetry. The final chapter is a tour de force that compellingly argues for meter as the catalyst that joins syllables, accents, and (often) rhyme to create the deeply subtle artistry of our language’s poetry.—Paul Lake, Poetry Editor First Things and author of The Republic of Virtue