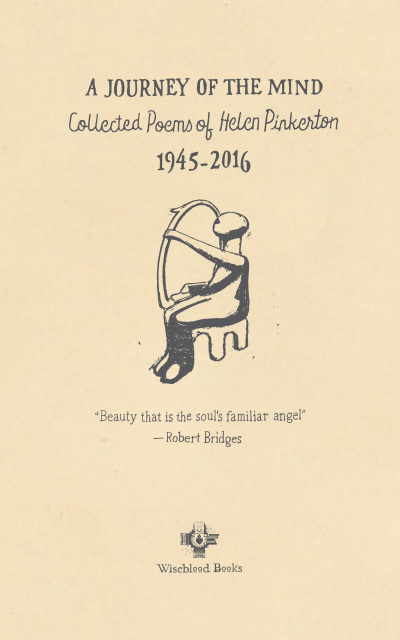 In 1959 Helen Pinkerton published her first book of poems, Error Pursued. In the fifty seven years since that date, Pinkerton's publication of poetry has remained as rare as her poems are well-wrought. Slim chapbooks such as Bright Fictions: Poems on Works of Art, and "The Harvesters" and Other Poems on Works of Art, followed, both published by R.L. Barth. In 2002, Swallow Press-Ohio University Press published the body of her work to that date in Taken in Faith: Poems. This latest collection, A Journey of the Mind: Collected Poems of Helen Pinkerton, 1945-2016, contains the life work of an authoritative master of poetic style. By turns lyrical and devotional, historical and metaphysical, the poems herein lead us from the beginning to the end of a life lived in submission to the Muse.

“She is a master of poetic style and of her material. No poet in English writes with more authority.”—Yvor Winters

“Pinkerton’s work is . . . remarkable for its intelligence. Her poems are not only enjoyable to read, but rewarding to think about. Philosophically, she seems to be a dualist, in the sense that she regards life as a continual negotiation between mutually essential, but seemingly opposed, elements. Her poems strive to balance and connect the transient and the timeless, matter and spirit, reason and faith, our particular lives and Being itself.”—Timothy Steele

"Her poetry, in form and in content, is both traditional and original. In the best sense of the word, it is poetic."—John Baxter, in Sequoia

Helen Pinkerton is a poet, essayist, and scholar of American and English literature. Her poems have appeared in such journals as The Paris Review, The Sewanee Review, and The Southern Review. The 1999 winner of the Allen Tate Poetry Prize, she has taught poetry, fiction, and the writing of poetry at Stanford, Michigan State, and other universities. She lives in Grass Valley, California.