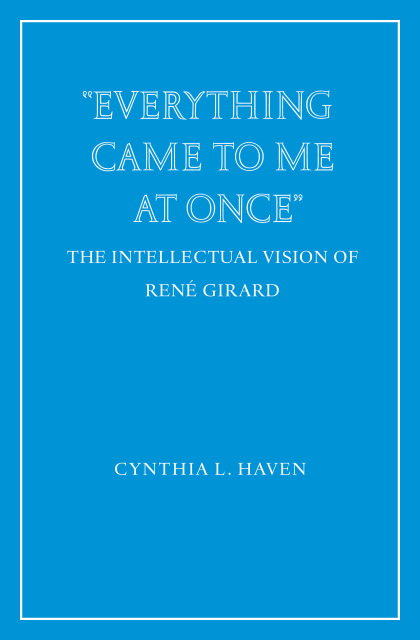 Everything Came to Me at Once: the Intellectual Vision of René Girard, by Cynthia Haven

French theorist René Girard (1923-2015) promulgates a sweeping vision of human nature, human history, and human destiny, but few understand the mysterious experience that gave birth to his theories: “Everything came to me at once in 1959. I felt that there was a sort of mass that I’ve penetrated into little by little,” he said. “Everything was there at the beginning, all together. That’s why I don’t have any doubts . . . I’m teasing out a single, extremely dense insight.”

“Some academics beguile you with a few interesting ideas while other academics shake your world. René Girard belongs in the second camp. He demonstrates the uniqueness and indispensability of Christian revelation to a culture that is skeptical of the Gospel, and does so in a way that is absolutely life-changing. Though he described himself as an ordinary Christian, this account of his conversion, as well as his academic work, supports my claim that in centuries to come René Girard may be remembered as one of the great Fathers of the Church.”—Bishop Robert Barron, Auxiliary Bishop of Los Angeles and founder of Word on Fire Catholic Ministries

“Cynthia Haven’s treatment of the theorist Rene Girard’s religious conversion is lively and lucid, but above all, it is judicious. Her careful attention to context and history remind us that Girard’s experience has a universal, human dimension that will make his seminal work widely appreciated for generations to come.”—Gregory Wolfe, editor of Image and author of Beauty Will Save the World and other books.

“René Girard devoted his career to tracking down the twists and turns of mimetic desire in literature, philosophy, and anthropology. Cynthia Haven's primer makes an invaluable contribution to Girard studies by tracking down the places where Girard discussed how his theories emerged from a personal process of intellectual and spiritual conversion—and its public consequences. What emerges is a compelling picture of Girard as a post-secular thinker who tears down artificial boundaries, such as the ones between the religious and the secular, between the private and public. Haven invites would-be Girard readers to see themselves as participating in a common struggle rather than scapegoating each other. This is a must-read book for a time when mimetic competition, shorn of scapegoating safeguards, rends the fabric of civil society.”—Artur Rosman, literary scholar, translator, and blogger at Cosmos the in Lost.