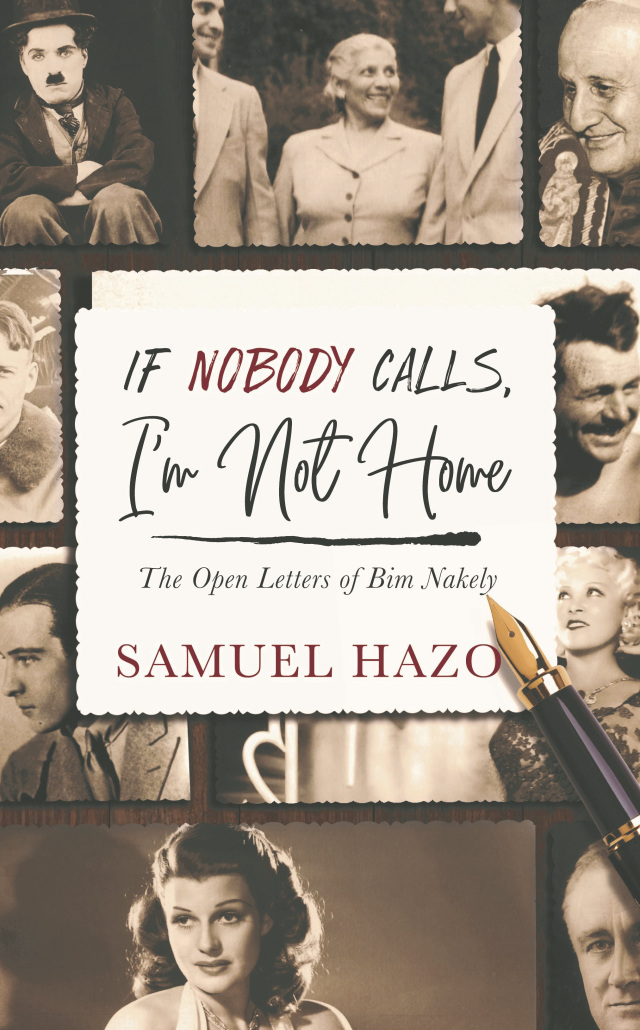 If Nobody Calls, I'm Not Home: The Open Letters of Bim Nakely, by Samuel Hazo

Bim Nakely, an outspoken single woman in her mid-seventies, has retired from her job as a seamstress. Having raised her niece’s two sons after her niece’s death and having lived to see both of them happily married, she now feels “unnecessary.” Although her adopted sons and their wives revere her and stay in touch, she feels that her real purpose in life is behind her. To compensate for this void, she begins writing never-to-be-mailed letters to people she admired in her life---her niece Lottie, Franklin D. Roosevelt, Mae West, Pope John XXIII, Ernest Hemingway, Gypsy Rose Lee, Rita Hayworth, Charlie Chaplin and others, all of whom possessed a unique courage to face challenges and survive them. It takes several unexpected happenings to make Bim realize that she, like everyone at any age, can still become suddenly necessary in ways she never expected or imagined.

"I had such a good time reading If Nobody Calls, I’m Not Home. Hazo has written a unique, moving and insightful epistolary novel filled with honest emotions about the very meaning of life. As Bim Nakely, the main character, writes letters to both famous people and family members, we share her compelling journey as she explores her past and considers her future. A beautiful read."—Eva Marie Saint, Academy Award Recipient

"Samuel Hazo’s lovely novel-in-letters features Bim Nakely, an outspoken woman who writes to people, some famous and some not, who have caught her attention through much of the twentieth century, Her letter-writing is an exercise in confronting and pondering the inevitable—her oncoming demise. Even though she is weakening, she remains of good heart as she sorts through her feelings. We come to know her so well that we laugh, cry, worry, forgive but most of all accept a woman who is a stand-in for people we’ve loved."—Kathleen George, Novelist

Sam Hazo has authored numerous works are, including When Not Yet Is Now, They Rule the World’ (Poetry); and This Part of the World (Fiction); and The World Within the Word: Maritain and the Poet (Critique).In 2003 a selective collection of his poems, Just Once, received the Maurice English Poetry Award. He has been awarded twelve honorary doctorates. He was honored with the Griffin Award for Creative Writing from the University of Notre Dame, his alma mater, and was chosen to receive his tenth honorary doctorate from the university in 2008. A National Book Award finalist, he was named Pennsylvania’s first State Poet by Governor Robert Casey in 1993, and he served until 2003.